Michael Fraiman shares this, “In the universe of Marvel’s Jessica Jones, society is not friendly toward people with ‘abilities’ – (in other words) superheroes (and) super villains …. These people storm across the city, leaving a trail of explosions, craters and frightened bystanders. People don’t know how to act around them. 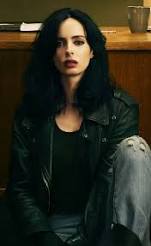 “There’s a scene midway through the show’s second season wherein the superhero is drinking whiskey on her couch with a guy who, until basically that moment, seemingly hated people like her. He asks ‘How is it you are who you are?’

“’That’s always the question,’ she deadpans, staring straight ahead. ‘What are you, how did you end up like this and are you gonna kill me?’

“It’s the dejected response of one who’s sick of being “othered” – seen as foreign, curious, exotic and dangerous. The law discriminates against her. Society doesn’t accept her. People freak out when they meet her.

“That Jones’s creator, like many comic-book masterminds, is Jewish shouldn’t surprise anyone. Societal exclusion is a common theme among Jewish artists. But Jews are in a better place now than a few decades ago, and other groups arguably have it worse: those who identify as gay, trans, black or Muslim in Western culture fight the same discriminatory battles from the fringes of society.

“The metaphor reaches back to the origins of comics. In the 1930s, Jerry Siegel and Joe Shuster, the sons of Jewish immigrants, created Superman. In the 1960s, Stan Lee (née Lieber) created Spider-Man, the X-Men, the Hulk and dozens more. Comic books were born during a time when anti-Semitism was far more potent, when heroes could celebrate being different and stand in solidarity with one another.

“Jessica Jones was not born during that era. She was created in 2001 by Brian Michael Bendis, a Cleveland native who went to a private modern Orthodox boys (sic) school and met his wife through Hillel. The Netflix adaptation is helmed by Melissa Rosenberg, who rekindled her Jewish identity when she moved to New York City in her late teens.

“While the show itself barely touches on Judaism (aside from a notably accurate shivah scene early in season 2), it nevertheless oozes with conventional Jewish themes, constantly questioning the correct moral answer to injustice in a seemingly godless world. Is killing ever justified? How do you react to prejudice? …”[1]

In Acts, we have another story of Jewish exclusion. Perhaps, it is also a story where the shoe is on another foot.

Paul and his companions go to the “place of prayer.” This was outside of the city where they were staying. It was by a river. This is in Greece and it seems that Jews were not allowed to congregate in the city.

It was likely a Saturday, the sabbath, when they encounter a slave-girl who has a gift of foretelling. In the comics, she would be a superhero. As a slave she was at the mercy of her owners. The owners seem to earn their living on this gift of the slave-girl.

Like a young sibling who won’t go away when you trying to be with your friends, the slave-girl hounds Paul and his companions. This slave would yell out, “These men are slaves of the Most High God, who proclaim to you a way of salvation.” (Acts 17:17b) Well, it’s true. This went on for days.

Now Paul does not impress me as someone who shirks attention. In fact, I would think that if someone is shouting out his mission, he would welcome it. Not only was she like a young sibling who won’t go away, she is also like one that repeats everything you say. After many days, Paul had enough.

We are not told if the spirit of divination was a good spirit or a bad spirit. Maybe, it was just an annoying spirit. In Jesus’ name, Paul orders the spirit to leave her. It wasn’t immediate, but it was soon.

The slave-girl’s owners now saw their income going to zero. This was very distressing to them. The slave-girl seeing her value also go to zero must have wondered what her fate would be. Her future looked dim.

The slave-girl’s owners want redress. The owners seized Paul and Silas and brought them before the authorities. The charge against them? They are Jews and they are promoting un-Roman ways. The crowd also got riled up and attacked the missionaries. The magistrates ordered them stripped, beaten, and thrown into prison with their feet placed in stocks.

Around midnight, they were singing hymns and praying. The other prisoners listened to them, like they had a choice?

Apparently, the earth was a music critic. Paul and Silas’ singing seems to have provoked an earthquake. It was so violent that the prison doors were opened and the shackles were loosened. Oddly, the earthquake did not wake the jailer. It was after the quake that he woke up and noticed all the prison doors opened.

Rather than face torture and possibly death, the jailer was going to do himself in. Paul stopped him. When the jailer looked in, he saw that everyone was still in their places with bright, shiny faces. Maybe the biggest miracle in this story is that the freed prisoners didn’t leave.

The jailer brings Paul and Silas out and makes an unusual request. “What must I do to be saved?” (Acts 16:30b) Why would a gentile who likely had no conception of Christianity ask such a question? And what is it that he wished to be saved from? A divinity? The authorities? His boss? It also implies that the jailer believes he is lost.

So, Paul and Silas went to the jailer’s house to tell them about Jesus and Jesus’ teachings. The jailer washed their wounds. Then as soon as possible the unnamed jailer and his household were baptized.

Paul and Silas’s enslavement is a positive one, the others’ not so much. The troubling part of this story is the slave-girl. Paul frees her from her “spirit,” but she remains a slave of her owners. Paul does not invite her to the spiritual freedom of Christ. The jailer and his household are baptized, but the slave-girl seems ignored.

When that younger sibling is hounding us, our typical impulse is to get away. Paul gets away by banishing the slave-girl’s “spirit.” And Paul seems happy to be rid of her. In this story, she seems like collateral damage, the outcast.

Perhaps the younger sibling that hounded us, really just wanted to feel included with ourselves and our friends. Being obnoxious may be a cry for inclusion. But then again, it might be just to be a desire to be obnoxious. In any case, how does that person we exclude feel when we walk away?

Sometimes – we just need to take a breath and ask ourselves what another person is feeling and, maybe, provide a little empathy.