I remember as a kid that I was prone to exaggeration – not that I’m not now. But for a me and my friends, it was this way of looking at the world as more than it really was and maybe safer than it was. My friend John had a set of army men, though I wasn’t in to that too much, it was fun spending time playing with them with John. We had mock battles moving the men like chess pieces, though I never heard of chess at that time.

As I grew older, I was attracted to stories that were bigger than life. I can’t remember how old I was when I got a copy of Pecos Bill. It was a book of tall tales by a fictional Pecos Bill in the western U.S. It later became a Disney film. This was a book of gross exaggeration and unbelievable exploits. But it was a fun read for a kid. It is now classified as fakelore.

Even older still, I would buy the latest issue of Mad Magazine. After a couple of years, I caught on that Mad was making fun of contemporary characters, fictional and real, and corporations. What still stands out for me was one story in particular, “The Day Perry Masonmint Lost a Case.” Hamilton Bugerbits was delighted.

Though attracted to these stories, I learned what was real and what was fake. I also began to learn what was true and what was false when I heard some story or tale from a friend. I struggled with trusting a friend versus being skeptical that something really happened. Slowly, I learned that if I asked questions about the story, I could either get a confession that it was false, or be convinced it was true, or be left with doubts when the story was artfully defended.

There was certainly trust in what was broadcast on the news. Reporters were trained to be objective. And when a reporter strayed from the truth, they were typically fired. The news organization had to maintain the trust of the people by verifying their stories.

Then came social media. In a hyper-political atmosphere, anything that might put an opponent in a bad light was shared seemingly exponentially. There was no need to check if it was true or not. Just click “share.” It was just too juicy not to share.

Which, of course, brings me to Facebook and Cambridge Analytica. The allegation is that Cambridge Analytica, a U.K. company, used Facebook data gathered from Facebook users, without their permission, to influence the 2016 elections. They are also accused with creating fake news targeted at their preferred audience.

These are all problems that law enforcement, but to a greater degree, Congress, needs to sort out. The issue I am looking at is where along in our development did we stop evaluating what was true and not true. Or why are we skeptical of people of an opposing opinion and totally trusting of anyone who shares our outlook.

Whenever we hear or see something that seems dubious, it probably is. There are fact checkers like Snopes that make it easy for us to check stories for their veracity. There some things that are just too good to be true. Like, maybe, someone rising from the dead.

The Sunday of resurrection must have been surreal for the disciples. After their leader was arrested, most of them fled. Jesus was then executed on a cross. Then the day after the Sabbath, Mary Magdalene announced that she saw Jesus. Peter and John confirmed that the tomb was indeed empty.

They were still huddling together, keeping the doors and windows shut and locked. I would imagine that if they heard a sound or a knock on the door they would all jump. At least Jesus formed them into a community where they could trust and lean on one another. This was much better than all them running off on their own. They needed one another after the shocking events of the past few days.

Some may have been wondering about Mary’s proclamation of seeing Jesus. Was she telling the truth? Was she deliberately being cruel with such news? Was it fake news? They likely believed that the tomb was empty, but there could be many explanations for that.

Probably sometime around mealtime, Jesus appeared out of nowhere. The doors were still locked. Yet there was Jesus. Jesus greeted them in peace.

We need to remember that they understood that once someone dies, they knew they would never see them again. Yet there is Jesus. It was a lot to take in and Jesus knew that. That is why Jesus showed them the holes in his hands and feet where the Roman nails were driven. Once that all sunk in, then they rejoiced that Jesus rose from the dead. As John puts it, they didn’t see Jesus until after Jesus showed them his wounds.

So, Jesus started over from the beginning, “Peace be with you.” (John 20:21b) Jesus told them that just as God sent Jesus, so now does Jesus send them. Jesus did not come back to pick up where he left off. Jesus came back as a visible confirmation that death was defeated. And Jesus came back to commission the disciples to spread Jesus’ word and teachings to the world.

In order for that to happen, they needed to be guided by the Holy Spirit. This was given to them from Jesus by Jesus’ breathing on them. The Greek is tricky here. Wind, breath, and spirit are all the same word in Greek, pneuma. Jesus’ breath is the Spirit.

The only gum in the works was that Thomas was off doing something and was not present. Perhaps, he was shopping for dinner. Needless to say, the disciples were really excited to see Jesus alive. When Thomas returned they probably jumped Thomas with their enthusiasm at seeing Jesus.

Well, Thomas would have none of that. Thomas needed to see Jesus’ wounds in his hand and his side. Maybe someone was playing a hoax on his friends and Thomas thought them gullible. Thomas thought they were just giving him “fake news.” 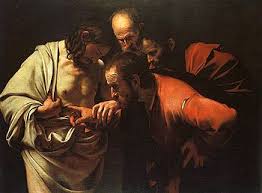 A week from that Sunday, Jesus appeared again the same way he did the previous Sunday and with the same greeting. This time Thomas was there. Jesus went directly to Thomas. Jesus challenged Thomas to put his finger in the hole in Jesus’ hands and to place his hand into Jesus’ side. Jesus told Thomas, “Do not doubt but believe.”  (John 20:27c)

This incident has forever plagued Thomas. When someone is skeptical, that one may be called a Doubting Thomas. We seem to be more and more bombarded with announcements and stories that are not true. We have a right to be skeptical. Yet we trust the witnesses of Jesus’ resurrection to know that it really did happen.

Thomas’ response is the only time these words are uttered by anyone in John’s gospel, “My Lord and my God.” (John 20:28b) Of all the disciples, Thomas is the only one, in John’s gospel, to declare Jesus’ true identity. All the others were just too excited to make any declaration. They were just excited to see Jesus again. Yet it was Thomas, the skeptic, who sees and declares who Jesus really is.

Even then, Jesus doesn’t give Thomas a pat on the back. Jesus doesn’t say, “Thomas you’re so smart in figuring out who I am.” Jesus, instead, tells Thomas that seeing him and recognizing the true Jesus is no big deal. Thomas didn’t believe when he didn’t see Jesus. Thomas only believes because he saw Jesus. So Jesus says, “Blessed are those who have not seen and yet have come to believe.” (John 20:29b)

Blessed are we who have not seen and yet believe. Now there are mystics who did see Jesus, but very few have done so through the centuries since Jesus’ resurrection.

John concludes that Jesus did many signs that John did not record. John just picked out the stories that he thought would be the best ones to convince a reader that Jesus is who Thomas said he is. And that Jesus is the Messiah, the Son of God. These are two titles found in Jewish scripture and tradition. John must be writing to Jews more than gentiles, even though John is rather hostile to Jews in his gospel.

John gives us a contrast through Thomas. There is the pre-appearance, skeptical Thomas. Then there is the true believer, post-appearance Thomas. John says that through believing we will have life in Jesus’ name.

We have been harsh, over the years, with Doubting Thomas, but maybe we should be more like Thomas. We need to verify what we see and hear and then we can proclaim the good news rather than fake news.