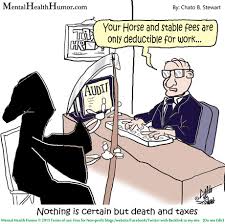 Death and taxes. The earliest use of the idiom was in The Cobbler of Preston by Christopher Bullock (1716), “’Tis impossible to be sure of anything but Death and Taxes.” It continues to be quoted by many.

It was true in the 18th century, it is true today, and it was true 2,000 years ago in a backwater province of the Roman Empire. Taxes are the price to pay for civilization. Luke’s mention of a census for the purpose of levying taxes was a way to date Jesus’ birth. There are problems reconciling Luke’s description with historical events, but we are certain that Jesus’ birth took place over 2,000 years ago.

Though from Nazareth, Joseph and Mary travel to Bethlehem. The messiah must be a descendant of King David, Joseph’s ancestor. David’s hometown was Bethlehem where it was expected that the messiah would be born. Luke checked off these important details.

The next detail is embarrassing. Mary gave birth to a child whom our translation says was engaged or betrothed, not married, to Joseph. One of the many criticisms of early Christianity was that the religion’s founder was illegitimate.

However in ancient Jewish custom, once a marriage was arranged and the contract signed, the woman and man were considered married even if they not yet lived together until after the marriage ceremony. It was rare, but a contracted couple could live together. By including an embarrassing detail implies the story of Mary and Joseph’s marital status at the time of Jesus’ birth was true.

Mary and Joseph did not have decent living arrangements in Bethlehem and so the messiah was born where stock animals were kept – not very sanitary. After being swaddled, Jesus was placed in a feeding trough. Not quite a bassinet.

Luke then shifts the story to shepherds in the field. The West Bank may be dominated by Muslims today, but even so, it is has Christian churches seemingly everywhere. There is a church where it was believed the shepherds on the night of Jesus’ birth kept their flocks. It is called the Church of the Shepherds in the Field. All significant events in the gospels have a church on the site.

Shepherds were very low on the social scale. In a story where the messiah was not even born in a house, stinky shepherds are inserted. The setting is not awe inspiring.

The shepherds were minding their own business when God intervenes on the earth, through the presence of angels. The primary purpose of angels was as messengers. That is what angel literally means. Angels can, at times, serve as God’s enforcers. Angels were not cuddly. They were terrifying. 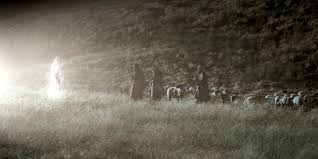 In the night, a supernatural visage emitting a blinding light appeared before a bunch of lowly shepherds. The angel did not come to smite the shepherds. The angel did have some messages. The first one was to not be afraid. The reason they should not fear is that the angel is bringing good news, gospel, and great joy for everybody. It is unclear how a bunch of social outcasts are to share any good news that is for everybody.

The next thing the angel tells the shepherds is that the messiah was born in David’s city, Bethlehem. The very thing that Jews have prayed for and hoped for has come to pass. Though they were hoping that the messiah would come and free them from the Roman yoke and from Herod’s erratic rule. They probably did not think it was realistic to expect it to actually happen. Yet this message of great importance to the future of Judea was shared with a bunch of shepherds in the middle of the night.

Paraphrasing Obi-wan Kenobi, Luke seems to be saying that this is not the messiah you are looking for. This is not a unifying military leader who will defeat all the foreigners from Judea and maybe Samaria as well. It is a poor child announced to poor shepherds. This messiah has come to free the poor from their misery.

If one angel is not terrifying enough, a bunch of the angel’s buddies show up. They praise God in front of the shepherds, doing something they would do in heaven. The shepherds are given a glimpse of what it is like in heaven. This was not shared with the religious authorities or with King Herod’s court. It was shared with the poor. Social outcasts were given a glimpse of heaven.

After the angels left, the shepherds were probably wondering what they should do with the information they just received. They decided to leave their flocks to fend for themselves and go to Bethlehem. This is a very un-shepherd thing to do. Jesus would later say that a good shepherd would not do such a thing, unless one sheep was lost.

They hurried to Bethlehem and somehow found the place where Jesus was born. Perhaps Jesus was crying, catching the shepherd’s attention. It was highly likely that Jesus was the only baby in a manger.

The shepherds shared their story. It is unknown how many people were there, but Luke implies that it was more than just Mary and Joseph. The hearers were astonished. Some may have thought the story incredulous, except for Mary. Mary treasured the shepherd’s story. Yet, Mary also wondered what it all meant, even though Mary had her own visit from an angel.

After seeing the baby messiah, the shepherds return to their flocks. As they went back, they praised God, perhaps in the same way that they saw the angels do it. After all, the angels probably knew how to do it right.

Luke does not mention that the shepherds told anyone else about the angels and the messiah. Perhaps they thought that once Mary and Joseph were told, their job was done. Though, it is hard to believe that they wouldn’t share such a miraculous story with just about anyone else they encountered. I can just picture some of the shepherds during a day off in a nearby inn and after a few glasses of wine telling everybody about the angels visiting them.

Luke chose to be sober when recording this story in writing. This isn’t a birthday story. It is the story of the coming of the messiah, the king of kings, and prince of peace. In this one event, God has changed the course of human history. The messiah’s followers end up conquering the Roman Empire from within.

More importantly, Jesus changes an attitude of indifference to the poor to a concern for taking care of the poor. Jesus gives a vision of a better world, without need or want. Through Jesus, the barriers separating humanity from God are broken. Through Jesus, the human and the divine are united. In the incarnation, we are heirs with Christ and of God’s heavenly kingdom.

This entry was posted in Bible, Holidays, Jesus and tagged Christmas, Incarnation, messiah. Bookmark the permalink.