In Luke, Jesus is concerned about finding what is lost and bringing it back. And by lost, Jesus is generally referring to people. There is the lost coin, the lost sheep, the lost son, who is also called the prodigal. When the lost are found, there is rejoicing in heaven.

How do we get lost? There was no GPS in Jesus’ day. And what does Jesus mean by lost? I think what Jesus means is when we get ourselves in a place where our own needs and desires overcome the needs and desires of others. The prodigal son gave his father a metaphorical slap in the face so he could have a hedonistic lifestyle. After that didn’t work out and the son returned, the father rejoiced that his son was no longer lost but was found. The father knew his son was no longer lost when his son displayed humility.

After the harvest, in the fall, corn mazes are popular. People can and do get lost in mazes. When we are lost, we are in a maze. One result of this feeling is that we need to find the way out. We might search systematically or out of panic. The longer it takes to find the way out, the more frustrating it gets and the less productive it is to get out. If we are smart, and this is more typical of women than men, we will ask for help.

The process of having another person help us out of our morass, is, in itself, the process of being found. The prodigal son discovered that being only mindful of himself was meaningless. The son knew he needed true friends and family.

To get ordained, there a myriad of hoops that must be jumped through. One of those hoops is a psychiatric examination, not mention the psychological examination. I never understood why I had to do both, but I had to do them! I often quipped that in order to get ordained, there had to be proof you are crazy. For my sponsoring Diocese of Utah, it was cheaper to have me see a bay area psychiatrist than to fly back to Salt Lake.

I had never seen a psychiatrist before and I had a lot of anxiety. Would I have a brain left after he got through picking through it? He began by asking me tell him about significant points in my life. So, I just told him stories about me. After I finished, he summarized who I was. I was astonished. Not because he got it right, but because he told me things about myself that I never realized before but now made perfect sense. I was so impressed that I wanted to see him again, but $500 per hour was out of reach for a seminarian.

“Not until we are lost do we begin to understand ourselves.” ~Henry David Thoreau

The real or metaphorical maze gives us the opportunity to discover more about ourselves. It is in a time of trial that we learn what we are truly made of. It is then we learn the verdict of our being.

If the outcome of a trial produces a verdict that is less than flattering of ourselves, we have a choice. We can resign ourselves that that is the way it is and do nothing. Or we can say to ourselves, “I want to be a better person.”

We hear in Luke 19 the story of a tax collector named Zacchaeus. Zacchaeus may have had a time of trial. Or he may have just heard about Jesus and/or Jesus’ teachings and decided that he must change the way he lives and the way he treats people. In either case, Zacchaeus says to himself, “I want to be a better person.”

Leading up to this point in Luke, Jesus was journeying. Jesus had his face set towards Jerusalem. And that journey is near its end. All that’s left is the uphill walk from Jericho. During this journey, Jesus is trying to teach people that they are to care for others. Caring for others does not include retribution, revenge, or lashing out. Jesus’ ethic is simple. It is love.

Jesus was intent on being in Jerusalem. He was to pass through, without stopping, at Jericho. Jericho is at roughly 1400 feet below sea level and Jerusalem is roughly at 2,000 feet above sea level. It is quite an uphill walk.

Luke tells us that Zacchaeus was a tax collector and he was rich. Throughout the gospels we are told over and over again how hated and despised tax collectors are. The people hate them, because they were seen as an arm of an occupation army. The religious authorities didn’t like them, because of their methods. The religious authorities were just fine collecting taxes, even for Rome. They also imposed a religious tax.

Most of us have or have had our taxes deducted from our income as we go, unless you are self-employed. A tax collector does not show up at our door with a couple of soldiers demanding a tax payment. But that is what it was like in Jesus’ time. Tax collectors were not employed by the Roman Empire. They were contractors. They made their money on commission. 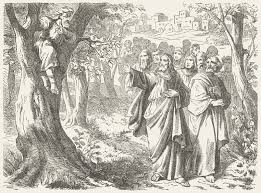 Zacchaeus wanted to see Jesus, but couldn’t because he was too short to see over the crowd. So, Zacchaeus climbed a sycamore tree. Jericho still has sycamore trees. There is one in town that has a low fence around it that is supposed to be the very one Zacchaeus climbed. Unlikely, but there is a good orange juice stand there.

Jesus has his mind set on getting to Jerusalem. But when Jesus arrives at the tree containing Zacchaeus, Jesus stops. This is curious: Jesus calls Zacchaeus by name. How did Jesus know his name? Was Zacchaeus that notorious? Were people in the crowd warning Jesus that a tax collector named Zacchaeus was in a tree up ahead?

Jesus stops his journey to Jerusalem. He tells Zacchaeus that he will spend that day in Zacchaeus’ house. One more opportunity for Jesus to poke the eye of the self-righteous by staying and eating with tax collectors. Though I must say, Jesus would get a lot better meal there than somewhere else in Jericho.

Of course, there is a reaction in the crowd. It does little good to complain so softly that it is not heard. Jesus and Zacchaeus hear the criticism. “There goes Jesus again. Carousing with sinners.”

Jesus then gives his mission statement: “the Son of Man came to seek out and to save the lost.” (Luke 19:10) Jesus didn’t stop to stay with the best Jew in town. Jesus sought out the lost one and saved him. Zacchaeus was lost and after being lost, Zacchaeus better understood himself. And the self that he wanted to be was to use his gifts for the betterment of those around him in Jericho.

Zacchaeus found himself, though he was lost. Luminita Saviuc says that there are ten main reasons why people feel lost.

“1. They have lost the connection with their own heart and Soul.

“We all get lost from time to time, and even though you might not always like it, you have to understand that it’s all part of this adventure called life. It’s all part of your journey. If you immerse yourself fully into every experience and every interaction life sends your way, no matter if good or bad, you will have so much to gain.

“So always remember, it is good to feel lost… because it proves you have a navigational sense of where ‘Home’ is. You know that a place that feels like being found exists. And maybe your current location isn’t that place but, Hallelujah, that unsettled, uneasy feeling of lost-ness just brought you closer to it.”

“Not until we are lost do we begin to understand ourselves.” ~Henry David Thoreau