Don’t Leave Me Out! 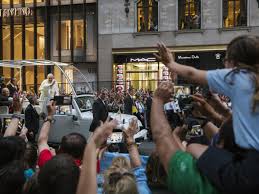 If anyone hasn’t heard, the Pope visited the U.S. Pope Francis has gathered the attention of the media for his surprising off-handed remarks. Famously when the Pope was asked about gay people in the church, the Pope responded, “Who am I to judge?”

What the media fails to understand is that this Pope’s emphasis is not on doctrine, but on people. Pope Francis is, generally, not saying anything that is not consistent with Roman Catholic doctrine. It seems to me that Francis is thinking, “If they are not against us, they must be for us.” Francis also recognizes that all of us are sinners.

There is still talk about Francis’ address to Congress. That Francis had something for liberals and for conservatives. Those labels are irrelevant to Francis. What is relevant to Francis are the gospel and the grace of Christ. How we treat other people is important. Ideology is not important. The people we elect to public office should work together for the good of all and not to make political points. Francis said nothing inconsistent with Roman Catholic doctrine.

The media label Francis as a liberal. He is no such thing. I assume Francis sighs at their lack of understanding. Caring for others has no label, except that it is the gospel.

It seems that Pope Francis’ message to this country is based on Mark 9:38-50. Don’t exclude people just because they are not Catholic. Give cups of water to anyone who needs it. Don’t put stumbling blocks in front of other Christians and those from other faiths. Don’t let sin in and when it does, confess and purify yourself. 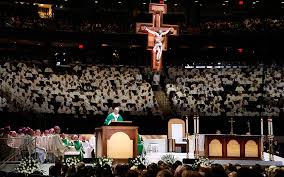 At Madison Square Garden Francis said, “In big cities, beneath the roar of traffic, beneath the rapid pace of change, so many faces pass by unnoticed because they have no ‘right’ to be there, no right to be part of the city.  They are the foreigners, the children who go without schooling, those deprived of medical insurance, the homeless, the forgotten elderly. These people stand at the edges of our great avenues, in our streets, in deafening anonymity.”

Jesus preached in rural areas until he reached Jerusalem. Francis is a big city bishop visiting big U.S. cities. Whether it is the rural poor or the city poor, God is there. That was Francis’ message. Francis echoed the sermons of Jesus.

At the end of Mark 9, Jesus is in Capernaum. Capernaum is on the north shore of the Sea of Galilee. Jesus is preparing to leave. He will never see Capernaum again. His Galilee ministry is over.

Jesus has just done some teaching about being child-like and even has a small child in the midst of the disciples. Jesus says that whoever welcomes a little child also welcomes him and whoever welcomes Jesus welcomes the one who sent Jesus.

Before Jesus leaves, John provides another teaching opportunity. “Someone had the gall to cast out demons. Now I know we haven’t been very successful at it and have needed you help. But Jesus, you need to do something about these demon healers. If you don’t stop it, then everyone will think they can cast out demons! I didn’t tell them they could do it. And I know you didn’t give permission!”

These Brand X exorcists were casting out demons in Jesus’ name. Perhaps they were in this business with mixed results and they found out that the key to success is to invoke Jesus’ name. Business will boom! Galilee seems to be a place with a lot of demonic possession issues. Jesus did his share of exorcisms and now it seems that people either do it out compassion or do it for a living.

Jesus has encountered people who oppose him. He is going to run into a lot more people who against him, especially after he arrives in Jerusalem. But for now, these exorcists are helping to “brand” Jesus. Anyone who does deeds of power in Jesus’ name will be so affected by the experience that they will not be able to speak negatively about Jesus.

I am reminded of two scenes from Ben-Hur (also one of my favorite movies). The first scene, fairly early in the movie, has Ben-Hur being taken away in chains to serve as a rower on a Roman galley. Most people died in this job. Ben-Hur falls down while he is chained to other prisoner slaves. A man, whose face in not on screen, gives Ben-Hur a drink of water. Ben-Hur gratefully accepts the water and the cup is knocked out of his hands by a Roman soldier. The soldier looks at the water giving man and sheepishly goes back to his job.

In the second scene, Jesus is carrying his cross. Jesus falls down and Ben-Hur recognizes Jesus, not knowing anything about Jesus. Ben-Hur fetches a cup of water and gives it to Jesus. Odd that this scene is not part of the Stations of the Cross. Anyway, Jesus drinks. A Roman soldier knocks the cup from his hands and pushes Ben-Hur to the side.

Jesus is saying that big acts and small acts for another person have no different weight to God. All acts of kindness and mercy are equally weighed.

Jesus also knows that people put unnecessary barriers to kindness and belonging, whether that is belonging to a church, a service club, or any other group. We seem to think in terms of who is in and who is out. Jesus doesn’t like that. It also seems that Pope Francis is not too fond of it either.

For Jesus, there are consequences to excluding people. Jesus uses a child as an example. In Jesus’ time, children were thought of as property and as such were basically slaves. As low as women were in that society, children were even lower.

So what Jesus says next is in the context of, “If someone as low as a child is not treated well, then there are consequences. So anyone of higher status deserves at least as much consideration.”

If you keep a child from Jesus, then you would hope and pray that a better punishment for you is to have a millstone hung around your neck and you were thrown into the sea. We’re talking about drowning here. Millstones were huge and exceptionally heavy. No person could lift one. There is one displayed at Capernaum National Park in Israel. It’s big. I don’t know who would do the throwing.

If your hand is responsible for a misdeed, it is better to cut it off. It is better to be in heaven maimed than be in hell with both of your hands. If your foot is to blame, off it goes. If one of your eyes is troublesome, out it goes.

Jesus uses hyperbole to think of body parts as snares. The Greek translated as snare literally refers to the stick holding up a box of an animal trap. Jesus is serious about sin. The point Jesus is making is not that we should mutilate ourselves, but that we have self-mastery. Obviously, our body parts cannot think. It is our conscious actions using our body parts that make us sin. Sin is a decision. The opposite of sin is to offer a thirsty person a cup of water. 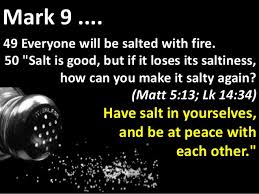 Jesus says everyone is salted with fire. Fire is a purifier. Salt is a preservative. So, in a sense, we are kept purified. But if salt has lost its saltiness, that’s it. You can’t regain the saltiness. We are to work at keeping ourselves preserved. We can’t slack. If we lose our preservative, our purity is in danger. Sin affects our purity. It is better to keep our saltiness than it is to have to be purified by fire.

Another way to clean or purify something is with water. Water is much gentler than fire. In the waters of baptism, we are purified of our sins. We are sealed with oil in the power of the Holy Spirit and marked as Christ’s own forever.

Baptism does not make one a good person. But baptism is the entry into a community of believers and of sinners who seek to do better in this world. It is a community that invites all. By being welcoming, we avoid the millstone.

In this community, we are strengthened to avoid those things that might prevent us from self-mutilation, thereby keeping our hands, feet, and eyes. It is a community that even for some who wear special outer wear, deep down we are no different. We merely have different gifts and different charisms.

When I was at Our Saviour in Placerville, people would ask me if they could do such and such ministry. I told them that they don’t need my permission to do a ministry for others. I would like to be in the loop, but my permission is not necessary. It took a while for people to get the message. It was hard to move from a priest centered and controlling model of parish ministry to one where ministry organically sprouts from the people.

We give cups of water. We welcome those we might deem below us or make us uncomfortable.

1 Response to Don’t Leave Me Out!