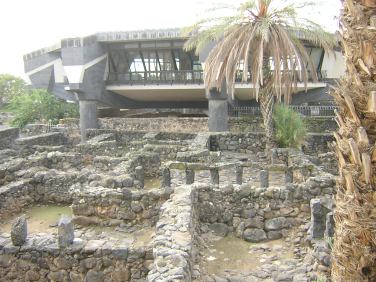 Jesus’ home during his ministry was in Capernaum. Capernaum or Capharnaum is today an Israeli National Park. No one lives there anymore. It is on the north shore of the Sea of Galilee. We believe Jesus lived in Peter’s house, which has been excavated. A Franciscan church is over the excavation with a glass floor so visitors can look down into Peter’s house.

Imagine your life if you decide one day to step outside of your house to sit by the lakeshore and all of a sudden you are inundated by a huge crowd? When Jesus began his public life, he must have known what he was getting into.

A couple of weeks ago, I was getting something to eat at the Folsom Costco. There were two really tall and big guys there getting pizza. I tried not to stare, but I couldn’t help but wonder if they were players for the Sacramento Kings. No one else bothered them.

When we lived in Salt Lake we were Utah Jazz season ticket holders. Season tickets holders are invited each year to a pre-season eat and greet with the Jazz staff and players before the season begins. We happened to walk in behind Mark Eaton. If you are familiar with the NBA back when, Eaton was a 7’4” center for the Jazz. My eye level was not up to his waist, so to speak. We decided not to bother him.

When I was in seminary, my field ed placement was at the cathedral in Sacramento. One morning I saw a car pull up in front of the cathedral and watched a man get two kids out of the car. I thought, “That can’t be Tom Hanks, could it?” It turned out that Hank’s first wife and kids lived in Sacramento and went to church at the cathedral. No one bothered him. He ended on the part of the rail where I gave him communion. I double checked with Dean Brown after the service if that was him and mentioned how no one made a fuss over him. Dean Brown quipped, “He must think we are an unfriendly church.”

In contrast, Jesus seems to have never been accorded any privacy went he went outside. At least no one asked Jesus for his autograph, maybe because so few could read or write. On a particular day that Matthew shares with us in the 13th chapter, the crush is so great that Jesus is pushed into a boat. I can imagine the silence as everyone waited to hear Jesus speak.

As was his custom, Jesus told them a parable.

Galilee was and still is the bread basket of Israel. Jesus used many agricultural parables because people could relate to them. A sower went out to sow.  Apparently this was a very indiscriminate sower. He didn’t care where the seed fell. Israel has very rocky soil, even in the fertile Galilee. If a field was not plowed and cleared, there would be rocks in a field. Few farmers in Jesus’ time could afford to clear a field. It was easier just to use what was there. Although, we might think a little discretion about where the precious seed fell might be used.

Only the seed that fell on good soil flourished. Again, a little advanced planning would have saved some seed and increased the harvest yield. Jesus concludes with a pun, “Let anyone with ears listen!” Wheat has ears too.

Jesus privately explains the parable to the disciples. I guess everyone else has to noodle it out for themselves. This is where the ears come into play.

There are four outcomes. 1) They don’t get it. That’s seed on the path. 2) One becomes a believer but falls away when stressed. That’s the rocky soil. 3) The word is understood, but wealth and the world are more important to the person than the kingdom, so the kingdom is abandoned. This is the seed among the thorns. 4) The word is understood and shared creating many more ears. This is the result of seed thrown on good soil.

We might assume that the sower is Jesus. But for the purposes of the parable, it might be the disciples. They were the only ones Jesus interpreted the parable to. The sower might be someone like Billy Graham. In any case, the sower is a minor character.

The seed is sown indiscriminately. I intimated that the sower was a really lousy farmer. Another way to look at it is to think of the abundance of the seed. This abundance is a sign of the kingdom. Jesus also uses images of abundance to describe the kingdom. Also even if seed is wasted, it is worth it to find some good soil where the seed will produce abundantly.

We can hear this and assume Jesus is applying this to non-believers and it explains how some people come to the church and fall away and how some people stick around. I know that is how I have read this for a long time. And that can be a perfectly valid interpretation.

I have come to think of this in others terms also. This parable can also apply to Christians.

We wonder why we don’t have more people in our churches. Where can we find this good soil that Jesus talks about? We would hope that the whole world will understand the kingdom and follow Jesus. And we might even hope that all Christians might come to their senses and become Anglican. Alas, this has not happened.

What do we do about this? Do we wring our hands? Jesus didn’t. He told this privately to his disciples so as not to get stressed over people who don’t get it. Most of the people in that crushing crowd did not sign up to be a disciple. Jesus is telling those that did, not to sweat it and the parable explains why those others are not following Jesus. But it could also be that some of those who didn’t follow Jesus later signed up.

Our job is to share the good news. We promise in our baptismal vows to do so, by either word or deed or both. Our job is to find the good soil. That does not mean we stop trying with all the less than desirable soils. The sower scattered there as well. Unlike the sower, we can’t know what the soil is like. When we find the good soil, we rejoice.

There is still good soil to be found everywhere. But seed will need to be spread on all the soils because we don’t know for sure when we will find the good soil.

How do we scatter seed today? Being friendly is one of many ways. When I arrived at Our Saviour there was a Welcoming Committee. After about year there, I told them that welcoming was not a ministry for a committee. Every baptized Christian is in the welcoming business, the sowing business.

There were some who took this to heart and smothered newcomers. There is a balance to being friendly and being scary. The people at Trinity Cathedral wanted to be respectful of Tom Hanks’ privacy. So they left him alone. Mark Eaton really stands out in a crowd and we didn’t bother him to give him a break from all the attention he must attract. Showing respect is one of the greatest gifts we can give to another person. The key is to be sincerely interested in another.

This entry was posted in Behavior, Church, Jesus and tagged Christianity, Parable of the Sower, welcoming. Bookmark the permalink.