You Were Hiking Where? 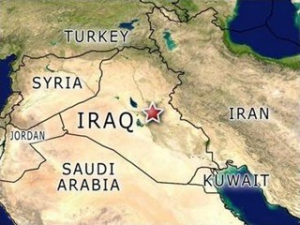 We now know the names of three American hikers who wandered from the Kurdish area of Iraq into Iran and were captured by Iranian forces. They have not been heard from since. Iran has charged them with illegal entry into Iran. Some have accused them of being spies. They are Shane Bauer (no relation apparently to Jack), Sarah Shroud (not a resident of Turin), and Joshua Fattal (but not a femme). We do not yet know if they intentionally strayed into Iran. If they did intentionally go into Iran, are they thrill seekers or just merely curious?

I’m going to assume another reason – sheer stupidity. I mean, how do three people decide to go hiking in a Kurdish area bordering Iran? Iraq is still terribly unstable and not safe for American soldiers, who have guns, let alone three unarmed civilians. So, the first question I would have for them is, why on earth would you even go to Iraq? Then they decide that they will take a hike by the Iranian border. If Iraq is unsafe, Iran is unsafe to Americans by at least a hundred-fold. (Oh, and by the way, the Kurds are not getting along with the Iraqi government. Just to throw in another factor of conflict and potential violence.)

Instead of hiking on the Iraqi-Iranian border, they could hike on the Chinese-North Korean border. That worked out well for two journalists who are serving a twelve year sentence at hard labor, where many do not get released alive. (And I might add, they made an unintentional mistake.) But no, somebody already did that. They could go to Burma to testify on behalf of Aung San Suu Kyi. The Burmese dissident could use some companionship in jail. Or they could go to Somalia and dissuade the pirates from taking ships. After all, they are unaware of the consequences of their actions and a kind word would reform them. Or they could go to Saudi Arabia, kiss in public (without head covering), pass out Bibles, and tell everyone on the street how Jesus saved them. Since the Saudis are so religiously repressed. But, perhaps, since they were in a hiking mood, they could have walked from the Ross Ice Station to the South Pole. Or feed the starving Piranhas in the Amazon. Or rescue Bison and Grizzlies in Yellowstone. (I have to stop. I ran out of sarcasm.) Alternatively, they might just have tried walking the Appalachian Trail.

I do feel sorry for these three people. I really do. I assume they are not being well treated in Iran. The charge of spying was probably trumped up, but the Iranians are very paranoid these days. They do not deserve what is happening to them. A hand slap and a release to the Iraqi authorities would be appropriate. Stupid people don’t deserve harsh treatment. I pray for their release.

This entry was posted in News and politics. Bookmark the permalink.